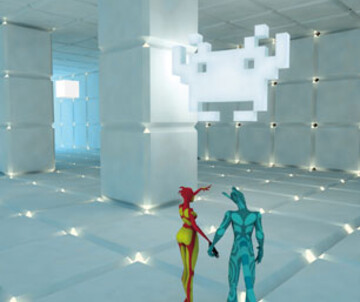 The experts will not only talk about game-interfaces in general, or game 'operation', but the two very different ways they approach joystick mods in relation to their work. They will discuss this complex and serious subject of gender and interface also giving some hilarious examples from 'the scene'.

sister0 gives a brief intro to her paraphernalia; a set of self-crafted game pads that are hacked into electronic-performance tools for a performance. She describes her project and how it opens a pathway for a larger proposal that asks; What are the ways in which we can engineer interfaces that validate the circulation of subjugated knowledges? Since developments in the gaming industry are very much geared towards a male dominated audience, sister0's modification of the typical gaming hardware i.e. gamepad mods draw upon the history of paraphernalia, and its feminine roots.
http://sistero.sysx.org

Walter will discuss several examples ranging from literal and cultural hacks of contemporary (video)game interfaces and spatial semiotics, gameplay and environments, modes of interactivity, and character identity and gender configurations – the starting point being his own recent work 'n0tb0t', an ominous phallic shift described by Julian from Selectparks as such:
"Walter Langelaar's n0tb0t antagonises conventions of games as slave to our control. n0tb0t decouples the user-agent from the input chain, leaving just a joystick thrashing about in response to every twist and turn of a bot rampaging through a stock QuakeIII level. My first impression of n0tb0t was of a haunting: an AI that would take no more, fighting back at the input device in an urgent attempt to disenfranchise itself from a history of bondage.”
http://lowstandart.net

Girl hacker and performing Artist from Tasmania, who works in the field of experimental media and fine electronic art. She manifests in Europe and Australasia and sometimes Sth America. Her interests include meme-hacking, ancient communication practices and giving homage to the late 19th-early 20th century manifestations of the paranormal, political cabaret and the experiential worlds they carry in their wake. One of her latest projects “paraphernalia” exemplifies this. Gamepads are transformed into sensitive sonic objects, talisman that among other thing, control and triggers sound, like a radio transmission coming from elsewhere, perhaps the otherside...
'a generative collision of net technology, riot grrl, dance, open source programming, vaudeville and the concerns of the psyche, her work weaves together transcendent practices of many kinds while feeding from the rot and beauty of contemporary daily life’.
-Filter Magazine #59. 2005. Linda Dement

Walter Langelaar
Walter Langelaar is a dutch artist currently based in Rotterdam. His working interests include open source game-engines, bot AI and neural networks, and "strange loops" through virtual and physical realities. He works with a wide variety of media-- including computer games, hacked electronic devices, software, video, sculpture and performance, and is a recent graduate from the Media Design MA course at the Piet Zwart Institute in Rotterdam.