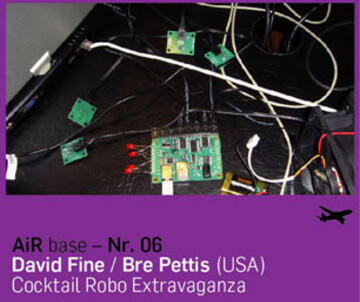 David and Bre present artistic installations at Roboexotica — the Festival for Cocktail Robotics — which takes place November 22–25. Roboexotica (www.roboexotica.org) is an annual festival where scientists, researchers, computer experts and artists from all over the world build cocktail robots and discuss technological innovation, futurology and science fiction.

Roboexotica is also an ironic attempt to criticize techno-triumphalism and to dissect technological hypes. Roboexotica is a joint-venture between monochrom, Shifz and the Viennese Bureau for Philosophy.


David Fine: The Prisoner’s Dilemma
A security guard will measure your weight before entering one of two prison cells. One cell remains unlocked, while the heavier cell is closed. Only when the weight on both sides is equal will both cages be freed and everyone given a drink. Participants must decide if they will risk imprisonment to free their friends and get alcohol.


Bre Pettis: R.R. Shot-Bot
The Reprap project aims to build a 3D printer to make robots that can make parts to make robots that can make parts for other robots. This project was started by Doctor Adrian Boyer and has developed a community of people who are working on this around the world. I got inspired by Zach Hoeken who’s started a foundation to develop the electronics and sell parts to support the development of this robot. The R.R. Shot-Bot will print out the most important component of the self replicating robot…the shotglass! This will demonstrate that the robot can extrude that the .5mm filament of molten plastic to create a water-tight bond!