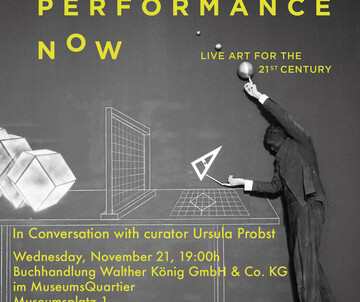 This major survey charts the development of live art across six continents since the turn of the twenty- first century, revealing how it has become an increasingly essential vehicle for communicating ideas across the globe in the new millennium.
Performance Now offers an unprecedented illustrated survey of this temporal medium which is notoriously hard to document, written by respected curator, art historian, and critic RoseLee Goldberg. Six chapters cover different themes of performance art, such as beauty, global citizenship, and activism, as well as its intersection with other media including film and technology, dance, theater and architecture—interspersed with illustrated profiles of some of the world’s best-known performance artists, including Marina Abramovic, Matthew Barney, and Laurie Simmons. Extended captions assess the importance of specific works in context.
At once a wonderful introduction to the medium and a must-have sourcebook for fans, Performance Now is the go-to reference for artists, students, and historians as well as lovers of avant-garde theater and film.

Author
RoseLee Goldberg is an art historian, author, critic, and curator specializing in modern and contemporary performance art. In 2004, Goldberg founded PERFORMA. She has created performance programs for the Museum of Modern Art and the Guggenheim Museum, both in New York, and is a frequent contributor to Artforum.