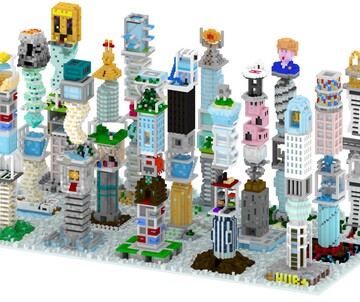 Many, if not most, videogames today are inherently architectural. They deal with depictions of space and actions taking place within that space. In this talk Youkhana and Pearson will discuss what that means for them as an architectural studio, and for the relationship between the two industries at large. They believe that games offer the opportunity for architects to create wild and contradictory spaces, like the type of conceptual dream worlds long used to hold a mirror up to society, from Piranesi to Superstudio. At the same time, games are pop-cultural media with a global reach that could be used to engage new audiences with architectural design. You+pea investigates how games will increasingly be used as tools to allow people to understand the forces that shape cities and give them a voice in this process.
In this talk the experts will discuss their research alongside other works to explore games as a tool for creating both architectural wonder and architectural dialogue, travelling from an urban ‘back up’ for Tokyo based on the logic of arcade games, through to games about the spaces of Renaissance perspective drawings, games about cities structured by icons of consumer society and even explorations of London’s uncomfortable post-Brexit future.

Biography
You+Pea is the architectural design practice of Sandra Youkhana and Luke Caspar Pearson. They currently run Research Cluster 12 at the Bartlett School of Architecture, exploring Videogame Urbanism, and have lectured on this subject internationally.Their current research pushes the use of videogame technologies in architectural design and they are currently collaborating with industry partners and cultural institutions.
You+Pea has a shared interest in architecture as a creative platform which draws inspiration from all aspects of popular culture – whether considered ‘high’ or ‘low’. We enjoy architecture that celebrates the graphic and the immediate, and demands attention through a vibrant conversation with its surroundings.
Projects have been exhibited across London including the Victoria & Albert Museum, Somerset House, the RIBA, the Royal Academy, Peckham Levels as well as internationally in South Korea and Japan. Their work has been published in books and journals such as Drawing Futures, Architect’s Sketchbooks, CLOG, The RIBA Journal and Interstices. They have curated symposiums as part of both London Festival of Architecture and the London Games Festival.

Sandra Youkhana is a designer working in practice and Teaching Fellow at the Bartlett School of Architecture. Sandra has worked with a diverse range of architects and designers, and as an Architectural Research Assistant at UCL. She has taught on MArch Architecture and Urban Design programmes at the Bartlett.

Luke Caspar Pearson is a designer and Lecturer at the Bartlett School of Architecture, UCL, where he has taught since 2009. He holds a PhD in Architecture from the Bartlett, exploring videogames and architecture, and was awarded the UCL Graduate Research Scholarship for this work.