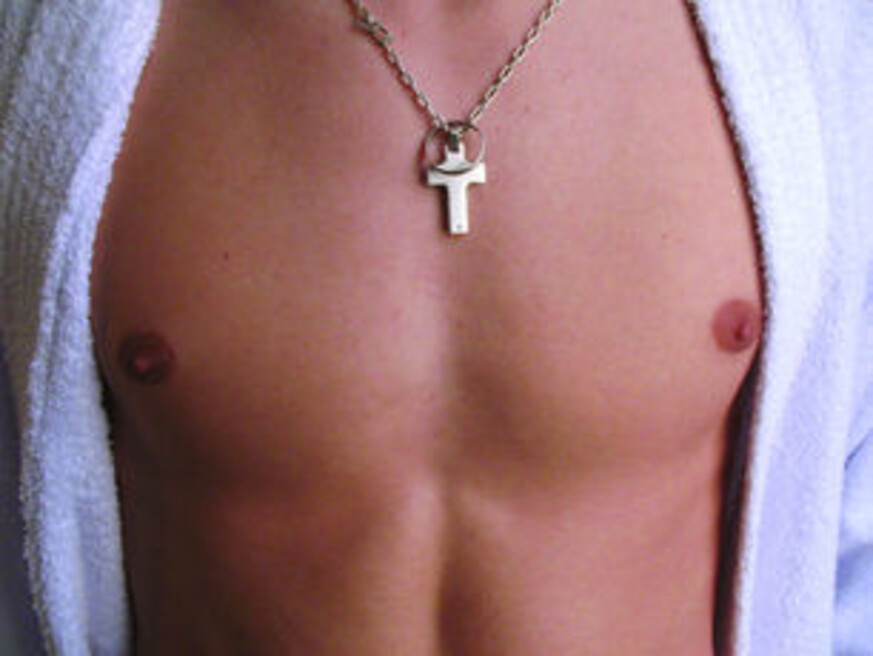 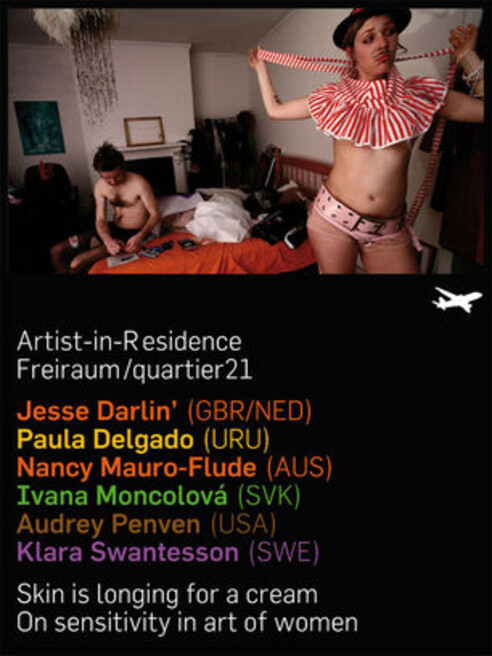 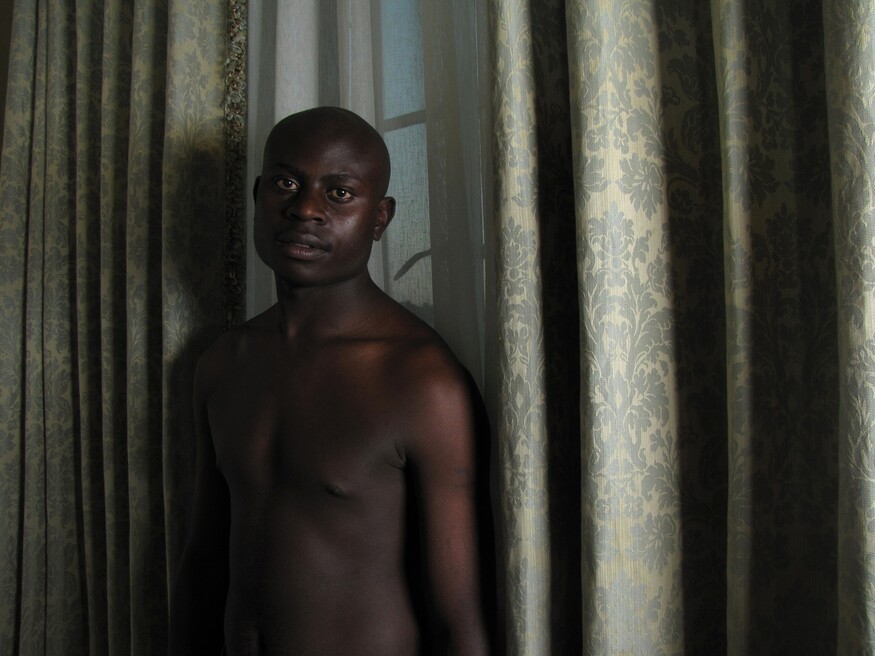 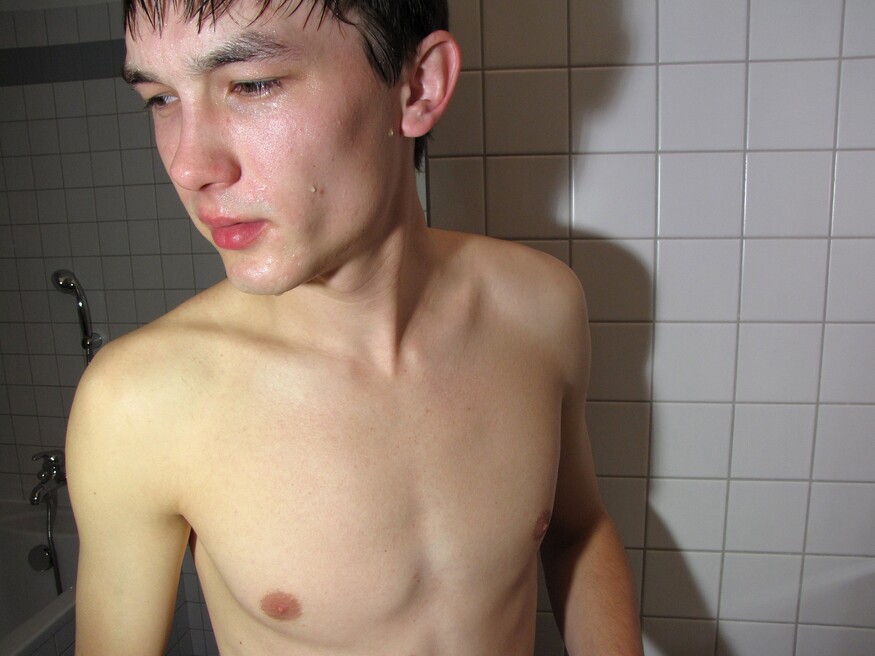 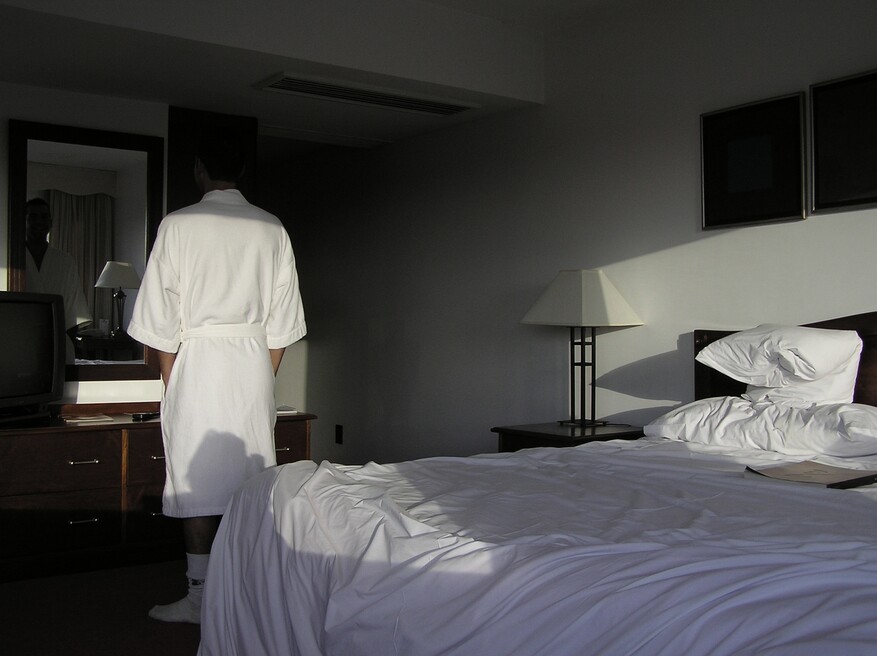 Pau Delgado is a visual artist living and working in Montevideo, Uruguay. She has been exhibiting internationally in galleries and museums since 2000. Her work tackles issues around the construction of identities -national, personal and gender based. She works with photography, video and performance. She attended several artist-in-residence programs and directed Cruces, an international art workshop in Montevideo.

Why would a woman ask a man about male beauty? Would not the woman be better suited to define it? This would be so, were we to remain within the very stereotypes that Paula Delgado’s project seeks to trespass, although in order to do so, she must fully travel within their confines. Thus, through tactics apparently borrowed from the world of advertising, How come you’re so beautiful displays, analyses and deconstructs the rhetoric of male aesthetics embodied within a group of men belonging to the intricate geography of our times.

The starting point is an ad for a casting placed in the local newspapers, soliciting attractive males for a photo shoot. In this way, from its inception, the project is framed by a competitive social format (the casting) and a criteria for assessing value no less social (photographic representation). Interestingly, when candidates respond they are not preselected nor are their images put to any test: all those who answer the ad - and have therefore considered themselves attractive enough to do so - are summoned to the promised photo shoot. The only valid parameter for beauty is its self-perception.
In a Kantian twist, Delgado dismisses the evaluation of male beauty - would it be even possible to carry it out? - to focus on the judgement that evokes it, and the photo shoot is followed by a sharp interview on the subject at hand. However, contradicting the German philosopher, the intense burden of prejudices and stereotypes that shape the respondents’ views reflects their low subjectivity when it comes to making an aesthetic judgment. Rather, they find reference in a cluster of ethical, racial, national, social, economic, cultural and political criteria that seem to relegate personal judgement to a lower plane.

The artist uses a variety of strategies to break down the socialized discourse and to bring out the men’s own, subjective, perspectives, which slowly come through after the initial resistance sealing their reflection (the majority of interviewees begin by stating that it is difficult to talk about beauty in another man). These strategies consist, basically, of acts of authorisation that encourage the men to speak out, repeating at the discursive level the act of self-assertion through which they had previously taken the decision to participate in the casting.

The fact that the investigation is carried out by a woman is not without significance. Before her, interviewees feel they have the authority to speak on behalf of their gender, although their opinions are quickly loaded with generalisations, patterns and prejudices. Thus they speak for the "Uruguayan man," "African culture" or "heterosexual men", framing their judgments from a membership not always well defined but at least reassuring.
Respondents seek to teach the artist, rather than express their views on the subject. It is as if they feel, as men, to be in possession of a knowledge that someone of the opposite sex cannot know, at least from experience. But that authority has been granted in advance by the artist and will later be relativised in the edit, when Delgado will make them say, ultimately, what interests her.
The photo shoot serves as another act of authorisation. It is a kind of ritual that gives those selected the power to speak as if they were models, i.e., as if they embodied the standards of beauty upon which they are asked to reflect. It is a game, moreover, where men, used to being the subjects of representation, are transformed into the objects of a female gaze that disrobes them, and not only in word.

The first videos focus heavily in the backstage, in the call for participants, the dates, the technical preparations. They have a more obvious ‘edit’, where significant phrases are repeated or some ideas reinforced by including texts. But as the project is consolidated, the emphases are less necessary and the interviews are increasingly focused on the geopolitical factors that not only pervade the definition of manly beauty but also the very notion of masculinity.
Thus, aesthetics are the kickoff for discussions on socio-economic issues ("You see a guy with blue eyes and say ... he is upper class", "I don’t know one business man, that makes a good salary, that drives a nice car, that doesn’t go for a manicure"), geography (“It’s very different being born in the rural areas than being born in the townships"), politics (“way back, men didn’t really think much of being beautiful, it was just overcoming the system of Apartheid"), national identity ("The Uruguayan man has always been absolutely careless about his personal image to a fault"), sexuality ("Now there are many gay men and they are attractive, they're cute, because they are the only ones who worry about their figures”), ethnicity ("There are a lot of cultures here in Johannesburg, and they say Xhosas are more handsome "), race ("You couldn’t say that a black man was beautiful, because they were seen as dirty”), even on the media-imposed system of image and taste itself ("It's very rare to see a model of dark complexion," "When they want to sell beauty or status, forget the typical Chilean"). But also and perhaps primarily, it is the starting point to discuss the guidelines that define male behaviour ("In the Afrikaaner culture, a male has to be a dictator" "For a man to say ‘I’m beautiful’ doesn’t sound right"), its possibilities and limits. These limitations include the inability to approach certain topics historically not sanctioned for discussion, such as a man’s own beauty, and, ultimately, to talk about themselves, because if anything is evident in the conversations it is the difficulty of the respondents to formulate a judgement itself, to exert a true subjectivity.
In this way, How come you’re so beautiful? is only in part a reflection on beauty, the world of fashion or the media. More precisely, it addresses values and processes of self awareness that come to be extreme (“Women can also find pleasure in looking at naked men, which is something that I didn’t know, so it does change my observation and understanding that women have feelings too"), revealing the implicit tensions in a field so vast – and so related to art – as the world of aesthetics.

Rodrigo Alonso is a Bachelor of Arts, theorist and researcher on the area of technological arts. He is an independent curator and professor in universities in Argentina, Latin America and Europe. He lives and works in Buenos Aires and Barcelona.

On September 2010 I launched the book Cómo sos tan lindo, a catalog that puts together the stages of the project about gender construction and masculine imagery that I carried out from  2005 to 2010. It is a hard cover catalog that includes a selection of 80 photographs, transcripts from the videos, theoretic texts about the project and an interview with me by Palo Fabuš. Text by:
•Rodrigo Alonso (Bachelor of Arts, theorist and researcher on the area of technological arts. He is an independent curator and professor in universities in Argentina, Latin America and Europe. He lives and works in Buenos Aires and Barcelona).
•Robert Morrell (works in the Research Office at the University of Cape Town and is editor of: Changing Men in Southern Africa, 2001; African Masculinities, with Lahoucine Ouzgane, 2005; and Baba: Men and Fatherhood in South Africa, with Linda Richter, 2006).
•Dani Umpi (writer, singer and visual artist. Recent individual exhibitions: Superbacana (Plataforma MEC, Mvd, 2009) and Todo incluido (Jacob Karpio Gallery, San Jose de Costa Rica, 2010). He lives and works in Montevideo).
•Veronica Cordeiro (Sao Paulo, Brazil, 1974. She is a writer, curator and visual anthropologist currently based in Montevideo, Uruguay).
•Palo Fabuš (critic and theorist. Works as an editor of Umělec (magazine for art and culture), and teaches about social media at Masaryk University in Brno, Czech Republic. He lives in  Prague).
The book was presented by Ana Knobel (Director of Culture at the Municipality of Montevideo), Fernando Sicco (Director of the Espacio de Arte Contemporaneo), Veronica Cordeiro (curator of the exhibition) and Egidio Arevalo Rios (a Uruguayan football player).