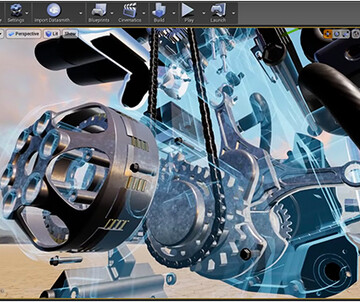 Tools used for game developement have always been at the forefront of technological innovations. Since the democratization of product resources for game creators ten years ago, game engines have evolved into real-time development platforms for a wide range of application possibilites beyond their original areas. They improve workflows and productivity for many creative and classic industries: Film and Animation, XR, Automotive, Architecture, EdTech, Art or Tourism. Real-time engines ar boosting the possiblilities for XR production (cinematic VR, mobile AR, 360 video), accelerating data visualization and integration in architecture and interactivate and immerse learning and training. The knowledge from game development, for example, creates advanced human-machine interfaces such as those used in virtual environments for autonomous driving tests. The expert will explain these and other current application areas and gives an outlook on the future of game technologies.

Biography
As Unreal Engine Evangelist at Epic Games, Andreas helps developers create successful games and applications with Unreal Engine 4. Having 19+ years of experience in different roles, he wore many hats. At Ubisoft Blue Byte he worked as Level-, and Game Designer and Creative Director on titles like „The Settlers“ and „Anno“. He co-founded the mobile game publisher Flaregames and later created the space exploration game „The Long Journey Home“ with a small team at Daedalic. He was working as a game scout, managed the Indie Arena Booth at gamescom in 2018 and lectures at various schools and universities. He loves tinkering on prototypes and streaming on Twitch.