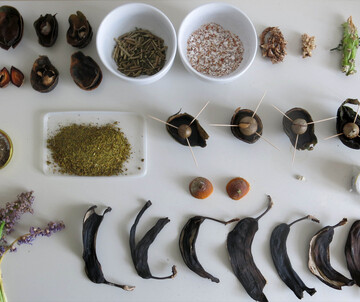 In the course of two months in the MuseumQuartier desolated by freezing weather Vahida Ramujkic’s studio became an experimental laboratory for examining an invisible material reality of daily life and its relation to human experience and labour.

Under the influence of great museum collections in nearest vicinity - of natural history (Natural History Museum), art history (Kunsthistoriches Museum) and ethnographic artefacts (Welt Museum) she built her own collection of daily discarded objects originating from the daily activities of the first mont of her residence. With the second month proceeded the meticulous sorting and systematising all of the items into exhaustive archive - <link http: www.irational.org vahida daily>

- where detailed account of each item regarding its provenance, purpose, description, relation to other items, so as the related context in which constructing of the archive took place was registered.

A self-constructed archive itself became a tool for research and organising immediate experience ith material world while evolution and/or transformation of collected items was also caused and followed, as the archive was set to vanish in its current state each of items returning to the life cycle by the end of the residency term.

Due to the logic of each material’s consistency, eg. resistance to atmospheric conditions or capability of developing life, level of complexity or artificiality, each of the items was induced to different kind of process involving simple procedures or more sophisticated technology. Public is invited to take a glimpse into the current state of the archive and get some more insights of archivist endeavours, experience and observations.

Biography:
Vahida Ramujkić’s work is based in social context and oriented towards social purposefulness of art. She initiated and collaborated in numerous long-term projects based on collaborative and creative work as impeller for establishing new social relations. From 2001 to 2007 her main corpus of works develops through Rotorrr collective in Barcelona and is dealing with politics of neoliberal development of the cities. Work related to legislative issues for migrants in early 2000s is compiled in the book “Schengen with ease” in 2006.

From 2007 she initiates a library of history textbooks under the name “History in dispute” – on the base of which she develops a methodological approach for collaborative analysis of the phenomenon of historic revisionism typical for former Yugoslav region and other former socialist states. Another long term project she initiates in collaboration with Aviv Kruglanski in 2008, “Documentary Embroidery” – uses the technique of embroidery in new context for collective documenting - analyss and articulation - of social realities. Minipogon is ongoing collaborative project which aims to mark path to counter capitalist relations of (re)production by rethinking all steps of labor organization. She is active and collaborates in collectives such as Irational.org, ReEX, Antifascist Alliance of Serbia, etc.