Fábio Baroli: When the Drought Arrives

Fábio Baroli: When the Drought Arrives 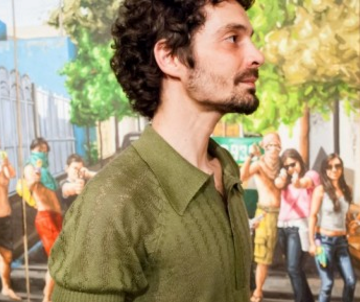 The Brazilian visual artist Fábio Baroli uses painting as a support to develop his poetic language, which deals with the concepts of voyeurism and eroticism, vernacularism and children´s imaginary world. Although his works depict scenes from the life of inhabitants of the Brazilian state of Minas Gerais (Brazil), its themes are universal and far-reaching. During his stay in Vienna in February 2017, Fábio Baroli will be showing in two distinct exhibitions at MuseumsQuartier.
On February 23rd, Fábio Baroli will present a continuation of his series Quando a seca entra (When the drought arrives). The exhibition will be composed of independent oil paintings in small formats which constitute fractions of images, each related only by its visual narrative based on vintage analogical photographs taken from family albums and from digital sources. This sequence of his works will focus on depicting the artist’s experience in Vienna during his residency.