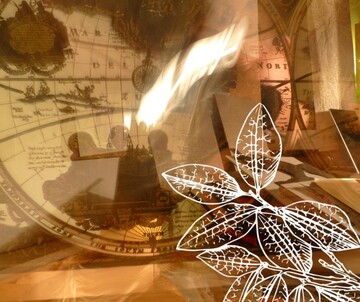 Mexican artist Mariel Rodríguez will discuss her work 'Flowers of Evil' for the finissage for her exhibition at Artistic Bokeh in Q21. The installation, as it is shown right now, presents a summary of the history of the coca plant until it’s inclusion in the List 1 of the 1961 Single Convention of Narcotic Drugs. For the Finissage the video and some elements of the installation will be changed in order to convey the recent history of the commodification of the plant. The illegalization of the coca leaf after the Single Convention aroused multiple social movements claiming for the distinction between cocaine and the coca leaf. Maybe the best well known of these movements is the one headed by Evo Morales, President of Bolivia and leader of cocaleros (coca farmers) himself. In 2012, during a UNO Convention on Narcotic Drugs celebrated in Vienna, Morales, reclaimed the reparation of what he called a “historical mistake”. Referring to the inclusion of the leaf in the List 1 of the Convention, but also to the prohibition of the traditional practice of chewing coca leaf and using it for medicinal purposes.

Taking as a starting point the engagement with language in the curatorial concept of Uno, dois, drei… The talk will concentrate in the consequences of some foundational concepts of the European project of Modernity to the relation it established with nature. Modernity, understood as the process of Western rationalization in order to achieve progress, had devastating ecological consequences. The concept of progress weather social, scientific or technological entailed the domination of nature as a crucial step towards the realization of a supposed true potential of mankind. Industrialization, individualism and a blind faith in economy were the milestones that sustain the contemporary ecological genocide. In the talk for the Flowers of evil installation, the history of the coca plant will be revised regarding these framework.

Mariel Rodríguez is a visual artist and researcher. Her work explores the use of images in the fabrication of hegemonic discourses that help to shape different identities. Through her visual works and artistic research she seeks to bring forward questions about the entanglement of power with the occidental regimes of the visible, seeking to find poetic ways of subverting meaning.

This work is funded and supported by kültüř gemma! 2016, and it’s presentation made possible by Mz Baltazar's Laboratory and RIAT Research Institute for Arts and Technology.