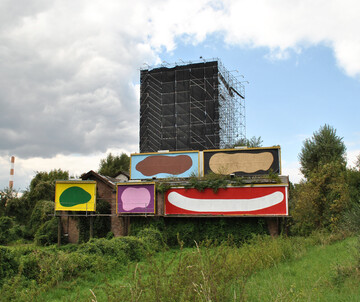 Born 1963 in Troyes, French artist OX first became artistically active in public space in the early 1980s. The artist group "Les Frères Ripoulin," which he had co-founded, began in 1984 to occupy billboards as exhibition space for their own art. The group was closely related to the "Figuration Libre" movement and stood in contact with Warhol's Factory, Jean Michel Basquiat and Keith Haring.

After successful international exhibitions the group split up in 1988 and OX dedicated himself to easel painting until the middle of the 1990s. Some poster-actions ("Affichages") were taking place again from 1993 and since 2002 OX dedicates his creativity almost only to interventions in public space.

His visual language is reflective and minimalistic: mono- and polychromatic stripes are reminiscent of Daniel Buren's works, architectural and color accents in the urban context are reinterpretated, simple dichromatic color gradients seem to carry Mark Rothko's paintings into the urban space, posted ads are breached by reduced optical illusions or replaced by geometric compositions.
The art of OX draws its power from the friction with its urban context. It opens up a meditative place of calmness that makes room for individual reflection and breath.