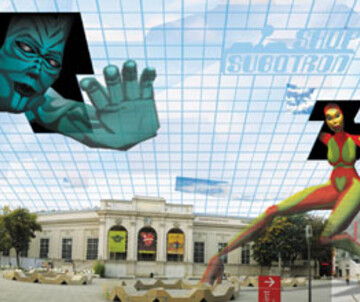 Alternate Reality Games are a new way of telling stories over every conceivable form of media. Players can search for clues on the web using Google, contact characters via email and IM, receive updates by text message, read messages in newspapers and walk outside to see an
airplane spelling out clues in the sky. Hundreds of thousands of people play ARGs in real time together, forming a 'collective intelligence' that is unprecedented in games.
Though ARGs have only become possible with the advent of the internet, historical parallels exist in TV, radio, early 18th century novels and even ancient Egyptian epistolary literature. These parallels can inform us about what makes ARGs unique, and what they share with other forms of entertainment. They also provide clues as to what ARGs may look like in the future - a future where they may become a dominant form of entertainment.
This talk will provide a basic introduction to ARGs, examining some recent games such as The Beast, I Love Bees, and Perplex City, and cover the themes mentioned above.

Adrian Hon is one of the world’s leading alternate reality game  designers, having been influential in the genre since its birth.  Previously, Adrian was Director of Play at Mind Candy, where he designed and produced Perplex City, the world’s first commercially successful ARG. Some of the venues at which Adrian has spoken include TED, GDC, Nordic Game and the Montreal Games Summit.
Before becoming a games designer, Adrian studied neuroscience at Cambridge University and Oxford University, and campaigned for the human exploration of Mars. Adrian currently writes a weblog at mssv.net and is the founder of the innovative Let's Change the Game competition to produce an ARG that will raise money for cancer research.