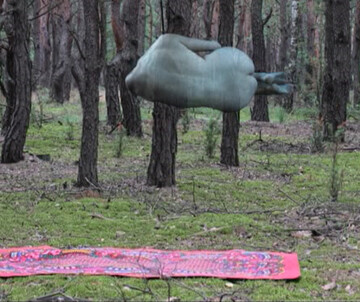 For quite a long time, I have been dealing in my work with the topic of cultural and social stereotypes and politics of the body. I am interested particularly in minorities who have been systematically eradicated from the hegemonic historical discourses, collective memory and visions of common future (which concerns foremost of Roma worldwide). My visual commentary or statement oftentimes draws on contextual interpretation of the art of western culture and its canonical representations embedded in their specific historical contexts. The last five years, my work deals with the topic of internal and external construction of Romani identity and the appropriation of the Romani body in the long history of European culture. I deconstruct stereotypical representations used by the majority society. I engage in a dialogue with a viewer on the topic of perception and construction of the Romani identity and challenge his ingrained judgements and views mostly based on their superficial contact with Roma or schematic representations in mainstream culture. Many of my projects addressed the inner tension between the performance of identity in the in-group and out-group setting.I push the viewer to re-evaluate their own narratives on a given subject.

The videoinstallation ’Constant Metamorphosis’ reflects the author's thinking of Intermedia and the nature of her artistic work. In this project she is working with images from older works (digital painting, prints on canvas). This cycle is called ’Bári Raklóri’ where the artist stylizes herself into a romantically myth of the Roma woman, as we know from different historical posters, postcards and naive paintings. In the video installation ’Constant Metamorphosis’ she is working with selected portraits of the two women whose faces she sutured by hand with a cord. The authentic sound of needle and cord piercing through the canvas is reinforcing the dramatic, disturbing and intimate intervention of the author, which is creating a new image. With this work the artist wants to critically question the old-fashioned role of women and their position in the society.

During her visit to Poland in 2014 at the occasion of the Porrajmos commemoration, the author made trips into nature. It was at one of such random walks that she found woods which became the site of her present visual narrative. The author brought a carpet with her with an intention to transform herself into a memorial in honour of the victims of the Porrajmos. By covering herself with the carpet, she became an object installed in the woods located near the actual place of the Roma genocide. When she wanted to return to this intriguing place the next day, she could not find it anymore. The place seemed to disappear from the face of the earth. Nevertheless, she encapsulated the atmosphere of the place and her intimate honour in an image that later served as a basis of the presented work.

The work entitled (out of) the deadlock is a video-installation accompanied by a deconstructed musical piece. Its point of departure is the historical fact of the Roma in the Slovak state taking refuge in the woods during WWII. The woods represent the ultimate refuge which remains to an individual or a group being excluded from the human community. They provided a hideaway and nurture. Nature thus figures here as a space of unconditional acceptance and “love”. The human figure in the embryonal position implies a danger and the instinctual response to it, as well as the relation of the man and nature—the man being a child born out of her uterus and finding a safety and nurture in it. The carpet represents the life of the Roma before the refuge, the life in the natural circumstances of their community from which they have been forcefully ripped out. The body is floating above the carpet, rather than resting on it, which hints at the uprooting. In a broader sense, the distance between the body and the carpet symbolizes that Roma oftentimes feel the necessity to supress some aspects of their personality or to distance themselves from their Roma relatives or friends if they want to succeed in the majority society. The stillness of the body is an index of the waiting of the Roma stashed away in the woods and of the need to be quiet, motionless, as if frozen. More broadly, it refers to the deadlock of the current Roma in their societies, as being forcefully assimilated, segregated or marginalized. The deadlock symbolizes an emptiness but simultaneously a potentiality, a lack of agency and a step towards its reclaiming. The soundtrack, an authentic recording from a funeral of the author’s relative, is consciously distorted to invoke a danger represented by the Nazis and their collaborators and the destructive effect of being rooted out from one’s life, from one’s culture. Though being a mournful song, the Romani music functions here as a symbol of the Roma’s capacity to break the deadlock which is, after all, inherent to every individual or a group.
- Nikola Ludlová

Emília Rigová (born 1980) is a visual artist from the Slovak Republic. In addition to her engagement with art, she teaches art courses (object, multi-media, inter-media) at Matej Bel University in Banská Bystrica. For Rigová, an object in the form of an installation or as a performance or a site-specific intervention is a basic element of her art language. Further, she expresses herself through 2D interface of a computer graphics, informed by the fundaments of classical painting. Concerning the content of her work, she explores intersubjective of emotion modified by a specific socio-cultural environment.
She is Q21 Artist-in-Residence invited by tranzit.org/ERSTE Stiftung in June 2018.