Born in 1973, in Belgrade, Yugoslavia. Studied at the University of Fine Arts in Belgrade, where she completed the postgraduate course in 2001 with the solo exhibition Traveling and the Magical Garden. Currently she is a Phd candidate at the same university.

In 1998/99 specialized at Madrid Complutense University and Fine Arts University of Barcelona.

Long time researches conducted in the first decade of the millennium materialize in the books:

- Le Schengen sans peine (2006), a comparative analysis of official/legislative and common/informal language so as practices employed in the process of integration of foreigners into EU (Ithaca Foundation, Brussels; Eyebeam, New York, etc);

- Storm, return home and other terrible stories for children (2009), book of tales narrated by artists grandmother in the occasion of their visit to grandmothers birthplace which in 90ies was severely hit by Yugoslav war. Recalling the period before and during WWII book explores mechanisms of memory and remembering in creation of histories, identities and relation with territories…

From 2008 researches and a series of organizes workshops related to material culture of making things from scratch, repairing and recycling in Bristol and Belgrade. (Business as usual, Spike Island, Bristol, Plasic bag recycling workshop, Belgrade, etc).

In 2007, initiates Disputed Histories project, consisting of a history textbook library, currently counting around 300 textbooks from different periods and regions of former Yugoslavia, and a series of workshops that compare and analyze contradicting historic narratives. Workshops have been realised in Belgrade, Banja Luka, Mostar, Rijeka, Berlin, Šabac, Zgreb, Prijedor, etc. False Truths (Istina/E verteta), has been awarded with the 1st prize of 52 October Salon.

In 2008 initiates collaboration with Aviv Kruglanski on Documentary Embroidery project and technique that extends to other projects such as Neighborhood Superheroes (Cairo, Barcelona 2010) and Microcultures, in collaboration with microorganisms, where fermentation process is experimented in culinary, social and economic sense (Belgrade, Leskovac, Villarrubia, and Barcelona 2011).

2016/17 she coordinates project School of antifascism conducted by Antifascist Alliance of Serbia. Collaborates with Ignorant Schoolmaster on diverse projects Naming IT War, Truth or Politics (2015/2016), A Guide through Bankruptcy (2015), takes part in writing proposal for the law of cooperatives (2015/16). With Noa Treister collaborates on the project indivisible/nalienable (Actopolis, Goethe Institute, 2016). With Nebojsa Milikic collaborates in Kamen-dinamike in Belgrade neighborhood Kamendin (2015/16). Co-coordinates project Deframing Histories together with Nebojša Milikić (2016/2017).

Getting more involved in refugees situation in Serbia she in collaboration with other refugies and volonteers produces Basic dictionaries for pashto, dari and urdu and curates an exhibition of two refugees in Ostavinska galerija in Belgrade.

Work during residency is envisioned to take form of a research led through series of open and collaborative events which aim to put in context and interweave diverse feminist theories and practices, so as to test and try sustainable economic models based on knowledge acquired through the same process. Each event is planned as an open invitation to take part in performing a particular activity which enables or requires collaborative engagement, and which at the same time would be used as a trigger for reflections, discussions and other forms that might evolve from it. Activities to be performed will be carefully chosen and will depend in much of the context concerning location and the period of the year. Just as an example it could be preparation of some highly elaborated dish or aliment as fermenting sauerkraut, making cheese, jam or herbal remedies or doing everyday maintenance such as mending socks and other garment, or simply activity in which apart from benefiting all its practitioners certain new value is generated.

All of the process would be observed and analyzed in the economic sense taking in consideration all of the material and immaterial value that have been inverted so as generated and all kind of relations that have been activated. Visualization of  those analysis might take form of maps, diagrams, writings, or even documentary embroidery, etc. A goal would also be set in ideating and elaborating distinct small-scale entrepreneurial business models inspired in feminist principles which would be fully sustainable and could provide basic subsistence and independence from the aggressive flows of capitalist economy. Each of the sessions will have a particular topic set so participants would be also invited to bring reading materials or simply come with their thoughts or skills to share.

Good examples of local small-scale economic initiatives (which fall in subjective criterion of feminist economy) will be explored, people involved will be interviewed and their practices analyzed as a part of a research, so as they also might be invited to the sessions in order to share their experiences.

Residency program I was assigned for in Q21 studios of MuseumQuartier during the months of February and March of 2018 were falling into ‘West Balkan’ line according to which the research topic had to reflect on the ‘relation between feminism, art historization and knowledge production’. Once I found myself on the spot it happened that my planned research which was centering on feminist economy, and normally would include lots of social interaction and gatherings, due to exceptionally freezing weather conditions (of up to minus 20 degrees) had to be diverged into different methodological direction. In a somewhat desolated atmosphere and in surrounding of great museum collections in MuseumQuartier’s vicinity – of Natural History, Art History and Welt Museum – rather an introspective working approach took place and it was conveyed by collecting and building a particular ‘collection’. My own ‘archive’ was carefully summing of all the material residues produced on a daily basis in the course of my first month spent in the residency - from shop receipts, museum entries, catalogs, alimentary packaging to food rests, everything that conventionally would fall in the category of waste, if I hadn’t preserved it. All items were organized following elaborated taxonomy following scientific methodology and meticulously registered with descriptions and necessary data. But, unlike other collections, to this one I had set a particular aim -  each one of its items had to disappear from the collection itself – to be ‘de-catalogued’ – and the only way to proceed this task was to process each of the objects converting them into ‘something’ that might be useful for people or functional for the natural environment. The items and the whole archive had to return to life. This step that followed in the second month involved fundamental research in diverse material properties and employed skilling in various technologies and procedures related to particular materials that might lead to their disintegration and/or transformation. The archive itself is called Vanishing Archive and it registers not only the items themselves but the whole process of its slow evolution and transformation, so as the context of its constitution. 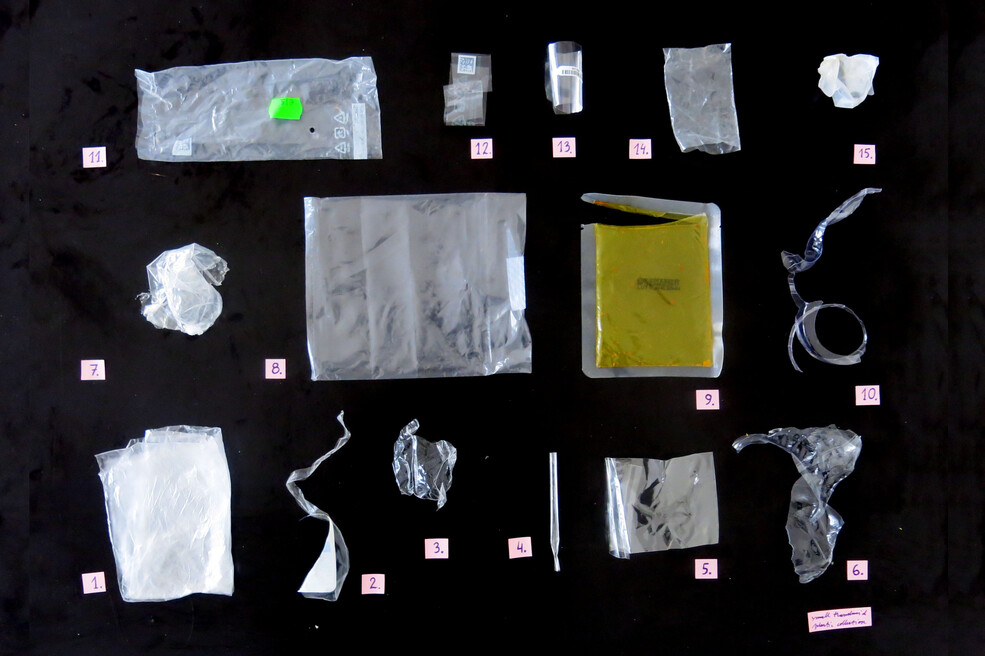 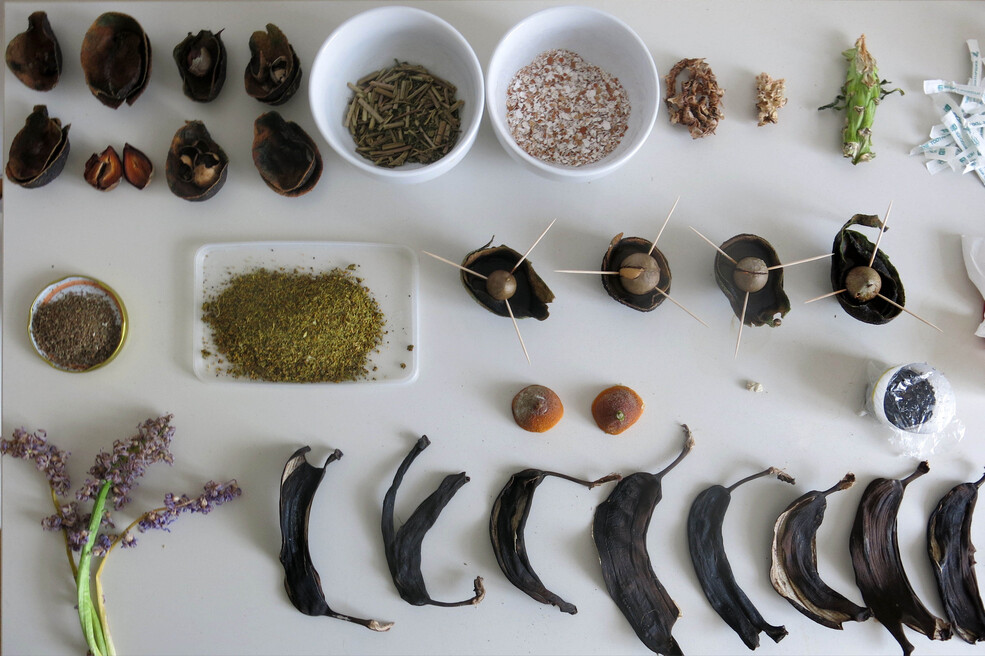 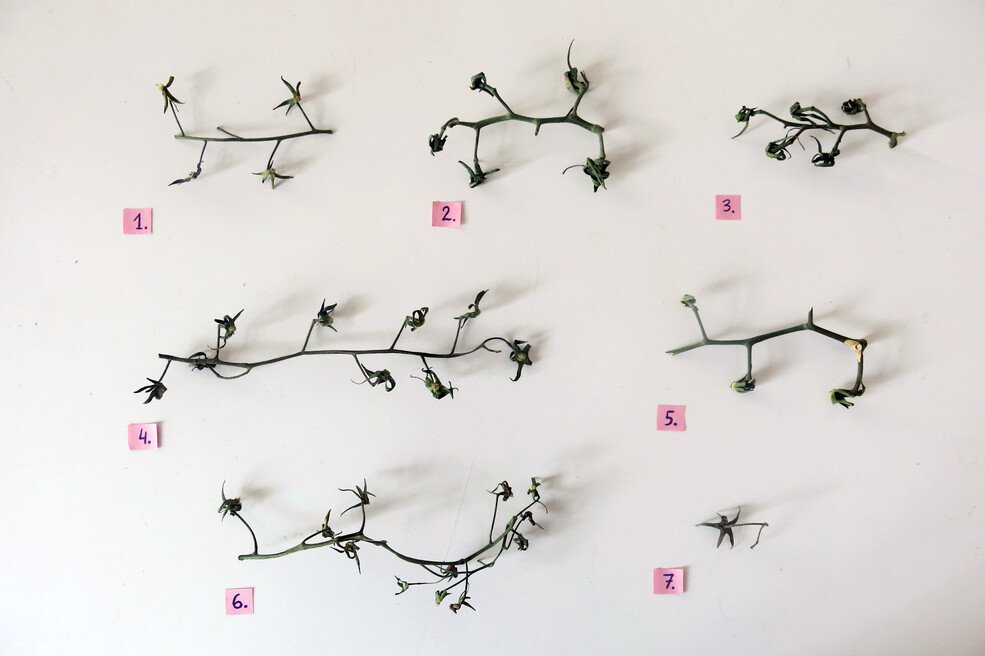