It's Alive! - CURATOR, The Center for Contemporary Art, Tel Aviv, 2012 { selected lectures & conferences }
2013 Co- programer of “Critical Space”, a mini-conference on the role of artists in shaping the city, at Artport, Tel- Aviv, on the occasion of Creative Time Summit in NY.
Lecture in Memory and Journey, an international conference on dimensions of Israeli and Jewish Art, Dusseldorf, Germany. <link http: memoryandjourney.com _blank external-link-new-window externen link in neuem>

Lecture in How to Identify with difference – Doing Art in the Public Realm, a conference organized by curator Elke Krasny with Lower Austria public art fund, Kunstraum Niederoesterreich, Vienna, Austria.
2012 Lecture on participatory digital practices in art, Print Screen Festival, the Holon cinemateque.
2012 Are curators independent? lecture and panel in a convention by the curatorial studies program of the Technion.
2011 Lecture and screening in the conference 24 Photos a Second- Happenings Between Stills and Video, the department for Film and Television, Tel Aviv University.

Concept:
“Frankie” is a project by Maayan Sheleff, Eran Hadas and Gal Eshel. It is a documentarian robot that interviews people about their emotions, attempting to ‘learn’ what it means to be human. It responds to certain emotions both with language and eye movements, creating computer-generated videos. These one on one interviews are uploaded online, forming an archive of the robot’s research, which could be searched according to particular emotional tag words (<link http: www.frankieproject.com>www.frankieproject.com).
frankie is in fact a physical version of a chat bot, hinting to The Turing Test, and the questions it entails about telling the difference between a human and a machine. frankie also references Eliza, the first 70s Chat Bot that was designed to resemble a psychoanalyst, and questions the “Eliza effect” – a phenomenon which causes people to treat an artificial being like a human being, thinking that it could understand them. In fact, it’s a sort of reverse Turing test- while frankie is far from being human, it compellingly challenges the interviewees to show how human they actually are.
As a form of “automatic” documentation that allegedly excludes the artist authorship, frankie questions notions of representation and participation. A deliberately well-exposed surveillance camera, frankie examines issues such as agency, control, and privacy, questioning how they effect us in a world in which every second is documented and mediated. It reflects upon the manner in which we choose to perform and present ourselves in the digital age, and how this ultra narcissistic world effects our perception of the other. 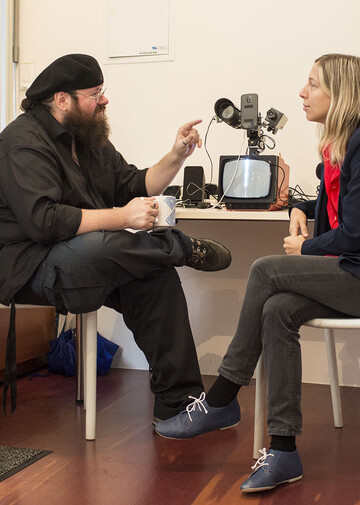 Maayan Sheleff (ISR), Artist-in-Residence at quartier21/MQ was invited for the current festival for digital art and culture, “paraflows”, with her project Frankie.

During my stay in Vienna I showed my project, Frankie the documentarian Robot, in the frame of Paraflows festival for Digital Art and Culture. Frankie attempts to learn what it means to be human by interviewing people and asking them questions, while filming and recording them. The interviews are then uploaded online, forming an archive of this research. Frankie set up her “office” at the Kunstlerhaus Vienna, and for the first two weeks of the festival she conducted interviews with many visitors. In addition there was a short film, made out of previous interviews, shown throughout the exhibition.

Through these interviews I also learned a lot about the culture in Vienna, for example how people are sometimes hesitant about participating and being exposed, but once they do decide to engage, they are very honest. That's why some of Frankie's most touching interviews were from those sessions. You can watch them here:
<link http: www.frankieproject.com>www.frankieproject.com

In addition I enjoyed walking around the city, experiencing as much culture as I possibly can, meeting artists and curators, researching for my next projects, going to openings, getting to know the various different scenes within the local art world, and establishing collaborations for the future, particularly as a curator which is my main practice. I especially enjoyed getting to know the Digital Art world in Austria, through my generous hosts Paraflows and monochrom.
One special highlight for me was to meet groups of children in the frame of the educational tour organized by quartier21. Having to mediate Frankie to the children made me think about the project in different terms, and I felt that they could understand it in a deeper way somehow, as they are so immersed in the digital world.