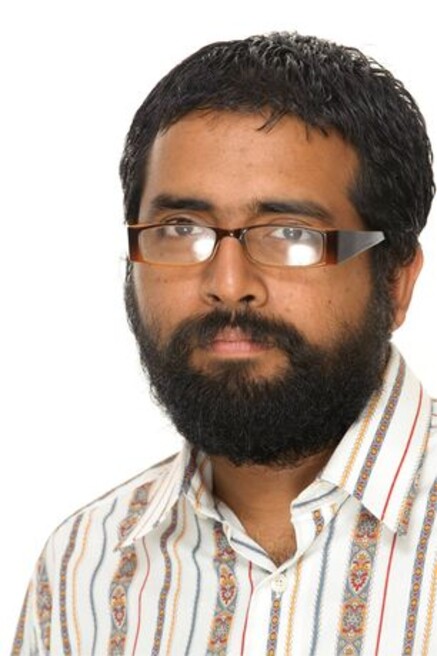 Presently he teaches at the Srishti School of Art, Design and Technology and is a researcher at the Center for Experimental Media Arts (CEMA). He has taught in the past at Dutch Art Institute (DAI) and Center for Environmental Planning and Technology (CEPT). He has been supported by fellowships by Sarai/CSDS (2005), Openspace India (2009), TED (2009) and Center for Media Studies (CMS) (2006).

He has also participated in the exhibitions Myth ©¨ Reality (2011) at The Guild, Mumbai, Continuum Transfunctioner (2010) at exhibit 320 in Delhi, Contested Space - Incursions (2010) at Gallery Seven Arts in Delhi and Astonishment of Being (2009) at the Birla Academy of Art and Culture in Kolkatta.

In July 2011, he is curating a residency and exhibition project on time called, "On the Sidereal" at The Guild (Mumbai).

Details on participation in Coded Cultures 2011,

transmediale has been invited to curate a residency in the context of the theme "City as Interface" as part of the Coded Cultures festival in September 2011 in Vienna. For this residency we suggest the artist Prayas Abhinav, a Bangalore based researcher who has been working in areas like urbanism / temporary architecture / critical social practice, physical computing, gaming and sound.

The choice of the artist for the residency is connected to a transmediale collaboration project carried out with CEMA - Center for Experimental Media Arts at Prayas Abhinav's home institution, Srishti-School of Art, Design and Technology in Bangalore. This collaboration project explores the pervasive phenomenon of labor outsourcing from a critical constructive point of view and takes place within the Germany and India years 2011-2012.

Prayas will Within the residency at Coded Cultures, Prayas will develop projects linking the threads of the outResourcing project and his personal research into gaming cultures, physical computing, community and commons-based exchange. He will also be working to start conversational links between the maker and develop groups in Berlin and Bangalore.

About outResourcing, 2011-2012, transmediale and Sristhi School of Art, Design and Technology
Outsourcing is often either simply embraced as an economical necessity of the global economy or criticised as such on the basis of the uneven distribution of wealth, power and/or labor that it entails. This project will take the phenomenon of outsourcing and approach it as a site for the production of new hybrid subjectivities and economies. Foremost it aims at actively engaging this pervasive, yet constantly changing feature of network culture and society from an art and design angle, as something which can be twisted and shifted into both a tool for reflection and action on a localglobal scale. This involves turning the outsourced tasks into a resource generated (and produced) througout the specific local infrastructures, urban developments and interfaces and asking how to reverse the process of outsourcing, finding ways of positively exploiting the situation into a two-way exchange.