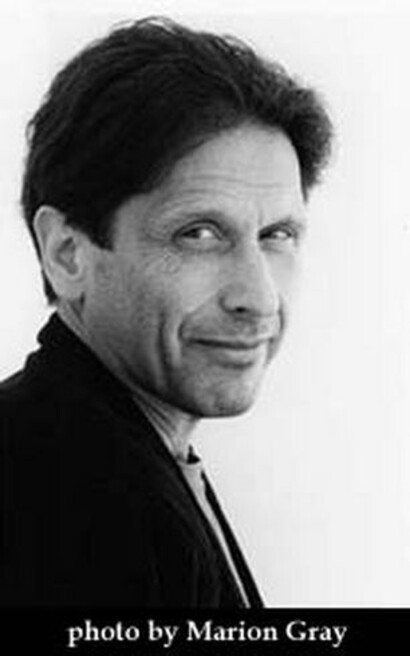 He has written prize-winning radio works for the Studio Akustische Kunst (WDR, Cologne), National Public Radio, and RAI (Prix Italia-special prize1984), and has collaborated with artist Melissa Gould on sound installations for Ars Electronica, Museum of Modern Art (New York) and Mass MoCa.  Among his cinematic collaborations are music for Claudia von Alemann's "War Einst ein Fischermann" and  Umberto Bignardi's multimedia memory of Bologna, "Ritorno alla Citta"  video works by Alberto Grifi and performance films by Molly Davies.  Recent commissions for concert/installations include the opening of the Klangturm in St. Poelten (Austria) and "TotoDonaueschingen," a performance/installation covering a 15,000 sq ft. space in a Baroque Park which opened the 1999 Donaueschingen Festival.  "Weft Warp and Purl" The Knitting Factory nyc 2000) and "Toto Angelica" 2001, (Angelica, Bologna, 2001) are recent live performance "sound portraits" of these venues and festivals.³Un Altro Ferragosto,² a recent radio work for Deutschland Radio, has been selected for special distribution by the EBU (European Broadcasting Union) for 2003-4.

Recent projects (2002-04) include musics for the Margaret Jenkins Dance Co (including a Trio for Fred Frith, William Winant and  Joan Jeanrenaud), for the Aspara recorder ensemble, the Nancy Karp Dance co.,  for Alter Ego (with Frankie Hi NRG), for Jim Fulkerson's Barton Workshop, a duo with Pauline Oliveros;  solo pieces for pianists Reiner van Houdt and Daan van der Walle,  as well as the Internet/Installation project GENETICALLY ALTERED RADIO;  and a collaboration with artist Kristin Jones  SHE SHADOWS  a concert of wolf calls from within a renaissance well (Rome, June 21/03); and EVERYBODY DREAMS THEIR OWN MUSIC,  an installation  inside the Deutzer Bruecke, Cologne (24.6.03).  Other projects in the works, include large-scale installations for the canals in the city of Groningen, and one for the new Ijsbreker center in Amsterdam as well as the web-based opera for Internet 2 in collaboration with  artist Jack Ox and Dave Britton, film music for the young director Luca Fantasia,  installation collaboration with concept artist Silvia Iorio; publication and recording of the entire INNER CITIES cycle, new chamber work for the Maarten Altena Ensemble, Amsterdam, and a piano work commissioned by the Charles Ives society of Naples, publication of  LOST MARBLES ­ a CD collection of unpublished electronic, choral and orchestral musics from 1980 ­ present.  A new edition of my MUSIC FOR EVERY OCCASION (mostly monophonic pieces) and  editing-work on his Collected Writings, for publication by  the edition MusikTexte.

Since Curran¹s appointment at Mills College he has lectured on his work at Brown University, Princeton, Wesleyan, The Art Institute of San Francisco, UC Berkeley, UC San Diego, Koelner Hochschule fuer Medienkunst,  Die Gesellschaft fuer Neue Musik, Cologne and at the Conservatories of Frosinone and Cagliari in Italy.

Among the prizes and awards I have received are:  the Bearns Prize, BMI award (1963),  National Endowment for the Arts, (1977 and 1983), National Public Radio Satellite Distribution Project Award, 1983-4,  DAAD (Berlin residency 1986-7) ,  Ars Acoustica International Prize (Westdeutscher Rundfunk, Cologne, 1989),  Prix Italia (special award l988) , Premio Novecento (city of Pisa 1993), Fromm Foundation (Harvard University, 1998), Hass Family Award (San Francisco 1997),  Meet the Composer (assisting many concerts over the years).  Curran¹s music for Margy Jenkin¹s MAY I KNOW was nominated for best dance score 2002 by  the Isadora Duncan Awards committee.  Ars Electronica Festival honorable mention for cd ³Our Ur²  2004 with Domenico Sciajno.  Currently a Guggenheim Foundation Fellow  2004-5.  His recent CD ³Lost Marbles² was selected by the Wire magazine as one of the top 50 in 2004.

"VINDABONA BLUES" is essentially a personal sound-portrait of contemporary  Vienna and its rich musical life. Through a condensed process of "musical-psychoanalysis"  I will first gather the basic materials for this work by listening to, interviewing, recording the ambient sounds of and briefly performing with a number of musical artists whom I consider, for their  musical diversity and  their unique skills, an actual representation of the current new- musical life of the city.  For the installation, I will generally feature sounds  - one artist per channel -  and will reconstruct up to 10 different "performances" based on my own live-performances using the original recorded materials-these will each be "marked" by a distinct set of digital transformations.  In normal circumstances, maybe only a few of these artists would possibly find themselves performing with any of the others.  Here in this  Installation,  I bring them all into the same space.  I do this by creating 10 individual spontaneous compositions, which when played-back and sounding at once, will produce a constantly shifting texture of sonic clouds, determined more by the substantial silences that separate them than for the unforseen collisions of multiple channels that could from time to time create dense walls of sound. Collaboration with the ORF Studios Kunstradio - Elizabeth Zimmermann  and Oliver Bokan will aid in the technical production of this work. A partial list of artists who will participate in this project includes: Mia Zabelka, Olga Neuwirth, Franz Hautzinger, Erdem Tunakan, Andrea Sodomka, Georg Nussbaumer, Bernhard Leitner, Diether de la Motte, Christian Fennesz, Uli Fusseneger (Klangforum Wien)

At a sound art conference in Koeln in 2004, I met with Georg Weckwerth, who suggested I make a proposal for an artists residency at the Museums Quartier via the organization TONSPUR, which shares an experimental sound-art space also located in the MQ.

I agreed on the condition that I could stay only for a brief time to accomplish my project.

The Project titled VINDOBONA BLUES was to be an extensive sound portrait of the actual contemporary music scene in Wien. To do this, I decided I would make recorded interviews with many of the leading new music figures in the city. I would also record their ambient sounds in their studios and above all record their voices singing - this was a decision to have all the artists participate (not so much with individual music contributions) in a democratic and neutral way...

Their generosity of time and energy allowed me to gather some essential sound recordings of them; On invitation from the KUnstradio of the ORF, I was able to produce a complex multitrack sound-work of about 30 minutes... This was broadcast on the ORF's Kunstradio (Elisabeth Zimmermann producer) programs and above all was presented at the TONSPUR project space, within the MQ 21 locations thanks to the fine organization of Georg Weckwerth's Tonspur and his collaborators Peter Szely and Valentin Ruhry - both of whom assisted me technically. This sound installation was presented on September 25th 2005, with live musicians and a fine public.

My stay at the MQ artists residency was, while brief, an intense but comfortable, and very productive experience, which put me in contact with much of the contemporary life of the city of Vienna...