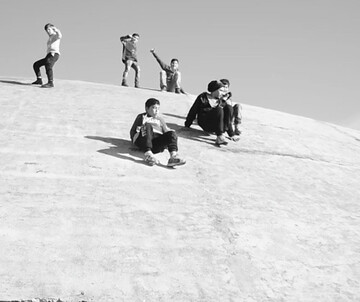 Summer is here and the frame[o]ut Open Air Cinema plays on 16 evenings from July to September at the main court and yard 8 in the MuseumsQuarter Vienna. In the 11th edition, frame[o]ut screen open air and at nightfall local and international cinema on each Friday and Saturday with current topics, exciting stories and surprising styles - free admission and mosquito-free.

Program of short films from Austria and the USA, approx. 75min

FUCKING DRAMA, AUT 2017, 17min, director: Michael Podogil
(University of Music and the Performing Arts, Vienna / Film Academy)
A young couple spontaneously decides to see a play that will be put on in a basement. At first the audience eagerly waits for it to start, and is then bored. The atmosphere changes abruptly when the play’s writer shows up.

LETHE, FRA/GEO 2017, 16min director: Dea Kulumbegashvili
(Columbia University School of the Arts)
Lethe, the river of forgetfulness, is in the underworld in Greek mythology. A horseman passes through the village on its bank. Children play with secret desires while adults carouse. Love and violence are instinctive elements of love. A new version of Greek mythology.

TRIPOLI, LEBANON, AUT, 13min, director: Julia Schmidt
(University of Applied Arts Vienna)
War changes people. War makes us forget. With time we rediscover things. In Tripoli there’s a dome that has been intended to serve as a theater since the civil war began in 1975. A forgotten place with a magical echo that’s rediscovered through music and children.

VIVA COCO!, USA/CUB 2017, 11min, director: Rocío Olivares
(Columbia University, New York City)
The 2016 Chanel fashion show in Havana, Cuba: The design fantasy created by the fashion house is undermined and rearranged by the camera’s gaze. As a result Cuba’s recent history, as told by the fashion show, is retold in a new way.

BEATRIZ’S HOUSE, MEX 2017, 16min, director: Suzanne Andrews Correa
(Columbia University, New York City)
A difficult split-up turns Beatriz’s life upside down. She seems to be losing everything that’s important to her. Then she hires Isabel, a 39-year-old caregiver, to maintain the lifestyle she had always known.

Stephanie Falkeis (AASFF curator) and the filmmakers will also be present.