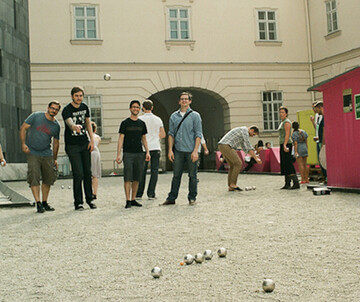 Located between mumok and Az W, the boules court is open to all urban sportsmen and women.
Playing equpiment (boules) is available for rent at ALOHA Bar. Opening hours depending on weather conditions. Use of the boules court at one’s own risk. Parents are liable for their children.

This is how you play pétanque

Starting
Toss a coin to decide who starts One player of the team draws a circle on the ground, of about 35 to 50 centimetres in diameter. He or she then tosses the Cochonnet a distance of minimum six to maximum ten metres. The Cochonnet has to finish up at least a metre from the boundaries or posts of the terrain. If the Cochonnet is thrown too short, long or out, the throwing side have 2 more chances to get it right (then the opposition get the Cochonnet). The first player stands with both feet inside the circle and throws the first Boule, trying to get it as near as possible to the Cochonnet. It is usual to ob the Boule, in a “back-handed“ palm-down motion (this imparts back-spin and makes it more controllable).

Continuing
A player from the other side then stands in the circle and throws. He or she can try to get nearer to the Cochonnet—or can try to knock away the opposition Boule. Trying to get near the Cochonnet is called ’Pointing‘, trying to hit away a Boule is quite fair and is called “Shooting“. The Boule left nearest the Cochonnet leads (is “on“). If it isn‘t clear which is closest, a tape measure may sometimes need to be used. The next player is anyone from the side not leading (ie not closest to the Cochonnet)— so there is no fixed sequence or fixed turns to go. He or she can chose to Point or Shoot, as they wish—this is where tactics come in. Players from the side not leading then continue to play till they get nearer the Cochonnet than the opposition best Boules. If they don´t, when they run out of Boules the other side then plays all their remaining Boules. If the Cochonnet gets moved you have to look to see who is now leading. Boule that hit the boundaries of the terrain are deemed “Out“.

Ending
When all Boules have been thrown, the teams agree which side has won the end (is nearest) and how many points they have scored. Again it may sometimes be necessary to measure. If a side reaches 13 points, the Game is over … and everyone shakes hands. If neither has reached 13, the side winning that End starts a new End, drawing a circle and throwing the Cochonnet. Nb—an End finishes early if the Cochonnet gets pushed “Out“ (special rules apply about scoring for this end).