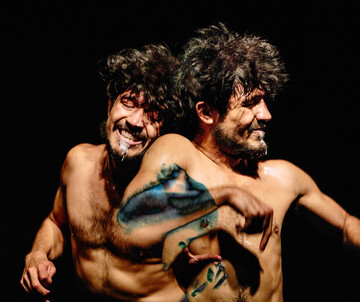 As a result of historical smuggling routes, the music of the state of Pará in northern Brazil, in the middle of the Amazon basin, is deeply rooted in the Caribbean tradition. In the 1950s, ships loaded with perfume and whisky also had merengue, salsa and zouk records on board. About 60 years later, these Caribbean sounds engendered “tecnobrega” – a music genre derived from appropriating and modifying folk songs with synthesizers and drum machines. Over 3,000 tecnobrega parties pop up every month in Belém, the capital of Pará, alone. And it’s no longer only Brazilian hipsters who dance to the “dirty” music from the slums, which still rings out from huge ghetto blasters nicknamed “boca de ferro” (iron mouth).

The heavy sound of tecnobrega rains down on the dancer in the excessive solo for Ícaro dos Passos Gaya – filthy and indecent as the early rhythms of brega. Invisible “ghosts” seem to take possession of the dancer’s body. He becomes a boundless zone of invasion and, in an exhausting dance, millions of pieces of information race through the dancer like power surges. Internet memes provide scraps of text that juxtapose vitality and obscenity, banality and death and do not resolve conflicts but reinforce them in a state of ecstasy.