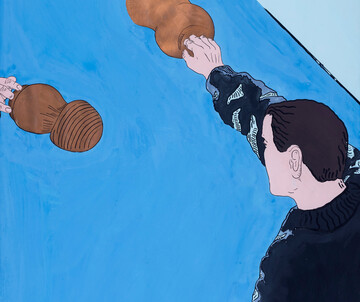 Bruno Gironcoli is one of the most idiosyncratic artists of the twentieth century. He gained public recognition with his late large-scale sculptures, in which archetypes and trivial elements meld to form futuristic conglomerates. It is less well known that alongside his work in sculpture Gironcoli also produced an extensive body of graphic works. This retrospective exhibition at mumok will for the first time focus on Gironcoli the painter and draughtsman. His works on paper will enter into dialogue with outstanding examples of the artist’s wire sculptures, polyester objects, installations, and monumental sculptures, also opening up new perspectives on the sculptural work.

Right from the beginning, Gironcoli’s works on paper were more than just designs for his sculptures. On paper, the Austrian artist took his ideas into dimensions that by far transcend any concrete work on physical materials. On paper, he animated his own sculptural work: Divorced from the laws of physics, his schematic figures, animals, symbols, and apparatuses enter into hypothetical connections and merge to form fantastic and surreal scenes. Gironcoli’s works on paper are literally “surfaces of considerations” that seek to rescue potential forms of life from alienated signs.