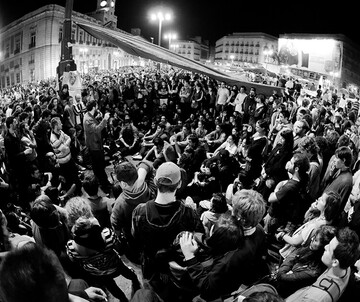 What does democracy look like? In 2017 the 'urbanize!' festival investigates the city as a place of democratic renewal, with lectures, discussions, workshops, films and interventions.

Our society finds itself in the midst of a comprehensive process of change that is leaving no area untouched. The ongoing redistribution of power and social wealth is leading to increasing precarity and a dangerous democratic political split that threatens our towns and cities as spaces for possibilities. At the same time, the towns and cities where paths for a democratic renewal, communal structures, structures for commonalities, forms of solidarity and coexistence, and alternative economic models are increasingly being sought. Many of these approaches arise in urban niches and explore possibilities for local action against a widespread sense of powerlessness in our globalised world. A great deal of potential for democratic renewal lies in collaborative city-making, in gathering expertise in urban negotiations and first-hand experience of self-efficacy for issues of local development: In the collaborative design of urban space lies the chance for a built world worth living in, for resilient neighbourhoods and sustainable social structures.

The 8th ‘urbanize!’ festival is hosting a public living room at the Az W, with international guests and urban stakeholders. We explore the approaches of a new radically democratic municipalism, issues of spatial justice and housing as a fundamental right, issues of participation and the possibilities of one citizenship for all, with lectures and discussions, workshops for adults and for kids, networking meetings, urban interventions, films and urban research. Change begins in the City!