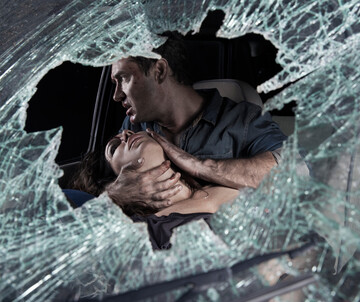 With Ossessione, his groundbreaking film adaptation of the classic novel The Postman Always Rings Twice by James M. Cain, Luchino Visconti is considered a pioneer of Italian Neorealism. In short scenes, raw, poetic, and brutal, Visconti tells the story of two lovers on the fringes of society: Gino, an attractive drifter, and Giovanna, the young, unhappy wife of a gas station operator, trying to escape from her former life of poverty. Together, they hatch a plan to kill Giovanna's husband, but the crime cannot unite the lovers for long.

The Belgian director of the Toneelgroep Amsterdam, Ivo van Hove, revisits the aesthetics of the neo-realism of Visconti for a fourth time, and transfers it to the theatre. The role of Gino is played by Jude Law, one of the most important actors of his generation, known for his performances as Hamlet and Henry V in the theatre as well as for his performances in prizewinning films like Cold Mountain and The Talented Mr. Ripley. For the first time, English actors will perform together with the Toneelgroep Amsterdam ensemble. With the power of an ancient tragedy, Obsession develops great themes about the destructive energy of passion and how the power of nature and the pressure of society can erode the commitment of people who love each other.