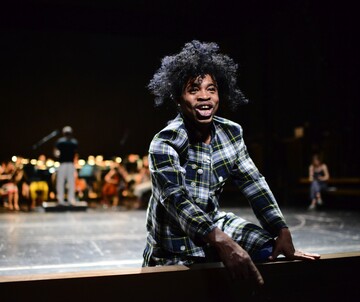 Discourses on cultural hegemony, Western humanism, jealousy, and cultural misunderstandings are just as present today as they were 235 years ago, when the “Turkish opera” premiered at Vienna’s Burgtheater to celebrate the anniversary of the victory over the Ottomans. Together with Benedict von Peter, the German-Ivorian ensemble of Gintersdorfer/Klaßen analyzes and deconstructs The Abduction from the Seraglio. Mozart’s opera is the musical and textual starting point of this work of collaborative search, since hardly any other opera deals so clearly with the confrontation of two heterogeneous cultures. This is reflected when Camerata Salzburg, Theater Bremen’s opera singers and the unconventional performers from Gintersdorfer/Klaßen meet. Two initially very different systems of thought and work create contact points, which, in the best case, lead to a change of both systems. The musician Ted Gaier from Die Goldenen Zitronen (The Golden Lemons) as well as the Ivorian showbiz stars SKelly and Franck Edmond Yao, a.k.a. Gadoukou La Star, take the audience on a musical journey of discovery – of course, with Hauke ​​Heumann as well, who enriches Mozart’s opera with pop culture pearls. This production brings together the various potentials from different worlds, and creates a new form that makes opera fans happy. It also provides sensual food for thought for die-hard fans of Gintersdorfer/Klaßen. Pleasure, and desire to be together. Here, opera becomes a living example of communication. This is quite an opera! For all the friends of the subtle difference between sophisticated musical deconstruction and crude disassembly.

Since 2005, Gintersdorfer / Klaßen have developed projects centered around the actors' life strategies and expressive forms, confronting them with their own strategies and aesthetics. The team is German-Ivorian with international guests. Initiated by Benedict von Peter, opera director and director of the Luzerner Theater since the 2016/17 season, this operatic experiment was created with the Bremer Philharmoniker and their musical director Markus Poschner. In the Viennese version the Camerata Salzburg performs directed by Jonathan Stockhammer.